Community Building Ventures is the name of a transnational project developed to create opportunities for young people from disadvantaged areas in the UK to utilise their building/training skills for the benefit of communities in Southern India.

The project was developed in partnership with COMMACT (Commonwealth Association for Local Action and Economic Development), Community Business Scotland International (the international network of Community Business Scotland), Renton Development Trust (Scotland), the Hilda Trust and Read Centre – nongovernmental organisations working with communities in Southern India.  The partnership has built upon a long standing set of relationships between the agencies involved. 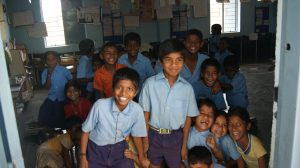 The development phase took place in 2006, where members of the partnership met in Southern India and developed a rolling programme of construction and personal development activities.  The first phase took place in early 2007, where two groups of young people from Teesside and Glasgow (Renton Development Trust) travelled to Bangalore to help build a classroom and an office at the Jamboo Savari Dinne School on behalf of the Read Centre (the school serves slum dwellers in South Bangalore), who have a long established working relationship with the school.  Staff at Community Campus and from the Renton Development Trust are sponsoring new teachers at the school and building a longer term relationship with the Read Centre.

In 2010, a party from Community Campus helped the construction of a meeting room for young people in Huyilar and as part of the ongoing partnership work we attended a conference in Kochi in 2012 and a further conference in Udalpur in 2013, also visiting the projects we have worked with.  We are working with the Read Centre to develop a housing project and to build upon our existing partnership work.

The organisation and its projects continue to raise funds that are donated annually to ongoing work at the Read Centre. With the Jamboo Savari Dinne School and the ongoing sponsorship of 2 female students in memory of a deceased colleague Cherie Smith.

We continue to work with the FEANTSA Federation – European Federation of National Organisations work with the homeless. We are a long standing FEANTSA member and in 2017 Nik attended the Gdansk Policy Conference in the fight against homelessness. We are involved promotion and facilitation of information, experience and good practice between FEANTSA member organisations with a view to improving the policies and practices of those addressing homelessness.

Community Campus '87 Ltd
Great news that one of our partners Coatham House has been nominated to be in the public vote for the Teesside Charity Golden Giveaway. The organisation who receives the most votes will receive the biggest share of the pot – a fabulous £5,000.

VOTE NOW to help them increase their share in the prize money.
➡️ https://teessidecharity.org.uk/vote/

Community Campus '87 Ltd
In the early years of CC87 we employed various contractors to complete repairs on our properties but as the numbers grew we decided to create our own Construction Maintenance Team ensuring we are in control of costs, quality and customer care while also meeting one of our aims of creating sustainable employment.