Action Homeless Leicester; held many similarities to Community Campus, refurbishing empty properties, though on a lease model rather than purchase due to higher property prices in Leicester, and provide support and a range of engagement activities with their service users.  Action Homeless face similar challenges to CC87 – increasing demand for services, the detrimental impact of welfare reform, local 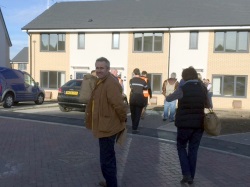 Saffron Neighbourhood Council; who persuaded the Mayor to sell to them for a pound a nearby Brownfield site that was overgrown and a haven for antisocial behaviour.  Part of the land has been leased to East Midland Housing creating an annual income stream for the project and the housing association has built an exemplar passive hausing estate of sixty eight, two and three bedroom properties.  The cost of fuel for these properties is estimated to be under a hundred pounds a year!

The Neighbourhood Council has retained some land and is developing a food growing project – we bought some jam and chutney they have produced – it was very nice to!

For more information about this and other Locality See for Yourself Visits see http://locality.org.uk/projects/communityled-housing/open-days/.

Community Campus '87 Ltd
Time To Talk Day is all about creating supportive communities by having conversations with family, friends, or colleagues about mental health. We all have mental health, and by talking about it we can support ourselves and others. Even just sharing a cup of tea and a chat or a walk and talk can make all the difference. Ask questions and listen, show you want to know how someone is really doing.

Community Campus '87 Ltd
Make space in your day this Time to Talk Day for a conversation about mental health.
Don’t try and fix it. Often just listening is enough.