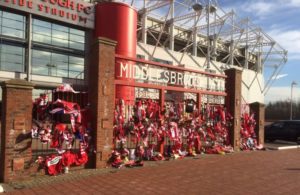 Community Campus were honoured to be asked by Middlesbrough Football Club and the family of Alastair Brownlee to distribute the memorabilia fans had left at the Ayresome gates at the Riverside stadium to commemorate the commentators tragic and untimely death earlier this year.

In accordance with the wishes of the Brownlee family the memorabilia was collected by staff of Community Campus and distributed to those in need via its network of homeless agencies, hostels and other providers of services to those less fortunate in the area.  The family commented “We know that Alastair would want everything to go to those in need as he did so much for charity”.  Community Campus 87 commented “We are really pleased to be able to work with MFC to meet the wishes of Alastair’s family so that the tributes left can be distributed to enrich the lives of those less fortunate than others.

Can you help make a difference in the Stockton community during these difficult times?

If you have an hour or two to spare each week and would like to volunteer your time to have a chat or pick up some shopping then read on.

From Catalyst Stockton: It's easy to feel helpless as we navigate through this unprecedented time, but no matter who you are or what your situation, you can make a difference.

There are a number of isolated/vulnerable people in our community who need help. We want to gather a group of special individuals who can offer help whether in person or virtually; this could involve a phone conversation just to check in on someone, or getting a neighbour’s prescription or their shopping.

If you think you can offer your time to help your community please get in touch. Together we can get through this.

Lock down restrictions are easing and life is slowly returning to some level of normality. What we have all been through these last few months, we have never experienced before. Some of us have struggled at not being able to leave home and others have struggled having to go out and about. it has been a worrying time with many of us feeling anxious and scared. The heartbreaking stories we have seen and heard and worrying about our loved ones are all naturally going to have an impact on us. it is important to remember we are not alone though and we are all affected by the Corona Virus in one way or another. Whilst lock down may be easing there is still much for us to be concerned about. Please remember we are here to support all our valued clients and colleagues. Don't suffer in silence when help and support is there for you. Talk about your feelings and let someone know if you need support. We will always help where we can. ... See MoreSee Less

We want to say a massive thank you to all our staff who have worked throughout this crisis ( either working from home or on site). Because of their hard work and commitment we have been able to continue to deliver our services helping and supporting all our vulnerable clients. Thank you all so very much 🙂 ... See MoreSee Less

⚠️ Everyone has the right to be safe from harm and abuse and ALL of us have a role to play in safeguarding.

The government has produced a safeguarding leaflet to assist in recognising the potential signs of harm and abuse and what to do if you have a concern.

Did you know that the TSAB have also produced a Teeswide Protecting Adults from Abuse Leaflet?

Both documents can be downloaded here:- www.tsab.org.uk/professionals/posters/

The Teeswide Leaflet is also available in seven different languages.

It's a hard truth to acknowledge that racism and other forms of discrimination exist in our modern world, but they do. It is an ugly reality everyday for many people. Community Campus is against all discrimination and we stand against it today and every day. We fully support the Social media blackout #BlackOutTuesday. Black lives Matter. ... See MoreSee Less