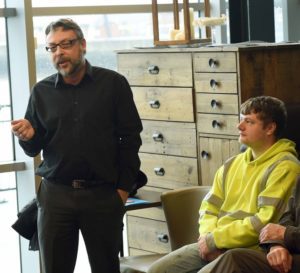 Simon and Andy were invited by Andy Preston to attend the Middlesbrough and Teesside Philanthropic breakfast meeting to talk to supporters of the foundation about the recent donation of £40,000 to support apprenticeships throughout the organisation. There were around fifty of the regions prominent business people and entrepreneurs in the audience who heard how the apprenticeships have and can change lives, create opportunity and give hope to young people.  Simon explained that Community Campus had already created twenty three apprenticeships during the last three years, eighteen of which are in sustained employment.  The apprenticeships that we deliver being aimed at young people who have been unemployed or NEET for six months or more and may be quite disengaged from the labour market. Andy told the group how he initially started with community Campus as a volunteer after a lengthy period of unemployment and was then taken on as an apprentice painter decorator;  two years on he has a level three NVQ in painting and decorating and is employed full-time with Community Campus’ Care and Repair Team.  Andy also lives in a Community Campus property he helped to refurbish!

Community Campus '87 Ltd
We provide supported housing across Middlesbrough, Stockton and Hartlepool. Get in touch if you need help or know someone that does.

Community Campus '87 Ltd
If you need help finding somewhere to live or know someone who needs help please get in touch.
➡️ http://ow.ly/bN5n50JNVSC